The Latest:
You are at:Home»HEALTH»CONDITIONS»Alzheimer's»The World is Waking Up:
I wanted to meet RFK but I was too young. I admired his work for civil rights in the ’60s, and have wondered recently what he would say about all the social injustices along racial lines  making headlines these days. 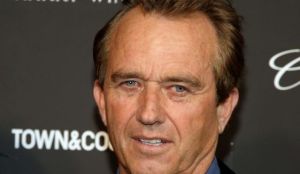 I will finally get to meet Robert Kennedy, Jr., just not under the circumstances I had hoped…

Little did I know that same wave of social injustice would land on my doorstep just weeks later.

Yes, despite the realities of vaccine injured and dead children, Big Pharma (a.k.a. Merck) along with the U.S. Government (a.k.a. paid off politicians) are now fast-tracking your rights as parents into the dumpster.

Why? Because billions of dollars are at stake and the system is set up for those in power to win.

It’s not herd immunity, people. Herd immunity is a myth, which is why in areas of China where populations are 99% vaccinated there are STILL measles outbreaks.  It’s not crazy, tin-foil-hat-wearing parents, because there are families telling the same stories with no motivation other than saving other parents from the hell of living with an autistic child in their 30s wearing diapers with zero language capabilities.

It’s also not about protecting vaccinated children from the unvaccinated.  Because if vaccines work, why are parents afraid of the unvaxxed?It’s also not about making the world safer, because safer is letting our immune systems grow to a stable place before injecting babies with open blood brain barrier noggins from toxins like mercury and aluminum — the latter of which is known to contribute to Alzheimer’s.

It’s about money. Lots of it. And control.  All of it. Which is why the government is colluding with THE vaccine manufacturer (that’s right, there’s only one, rhymes with JERK, and they have cart blanche to make the cheapest vaccine they want with the most inferior ingredients they want and the Government writes a big fat check to protect them, to date totalling $3 billion and counting, all of which parents would gladly give back to have their healthy children back).

–if they are compensated at all.  Most opt out of the “Vaccine Court” because the process is often humiliating and is more like a Kangaroo Court than anything.Now the #cdcwhistleblower Dr. William S. Thompson comes out in August to confess data was FALSIFIED at the CDC level by Merck to keep its 95% or better safety and efficacy rate on its meales vaccine, including that when the data was rerun African American males are 336% more likely to have a reaction.

THIS IS SUPER IMPORTANT because by falling BELOW 95% Merck’s patent should have expired which means the vaccine would have been opened up to manufacture by other drug companies (which would have been good for us, btw).

Keep in mind Big Pharma lawsuits do bupkiss.  Glaxsmithkline recently was fined $3 billion for falsifying its Paxil data — which was shit because GSK’s revenue on Paxil was $44 billion.  And BTW you won’t read about any of this except in alternative blogs like this one, because newspapers are dead/dying and broadcast media is funded by big pharma (watch the commercial inbetween the ‘news’).

On the heels of the #cdcwhistleblower, an ‘unknown foreigner’ somehow (still unidentified) arrives at the ‘happiest place on earth’ and spreads the measles virus around, igniting a shitstorm over 135 cases (no one died and, yes some were unvaxxed but also some were vaxxed thereby proving there’s no guaraneed on either side).  We’re talking about 135 cases in Orange County, a county that houses 3.1 million people.  (BTW the OC health department issued the ‘all clear’ 21 days later which is the incubation period).

It’s painful, I know. Cry on my shoulder. Cry on the shoulder of your friends and family. It is disheartening, but we’ve got to get the word out. The problem is NOT unvaccinated children, the problem is Big Pharma wants your money and it doesn’t care how it gets it.  In the name of herd immunity, it is seeking to tighten your rights as parents and monopolize its vaccine cash cow as long as it can.  Many many many many dollars are at stake.  Many many many many lives are at stake, including yours because madatory adult vaccinations are next.

Go googling. See for yourself.  The story will not come to you, you must use your own brain like I did and go find it.  In 35 states, 110 bills are under review currently to madate vaccines for EVERY child regardless of religious or philosophical objection.  Regardless of your child’s genetic code which might make him or her the next medical victim.Wake up, pay attention. For your children and grandchildren, for your nation.  I don’t think we want a nation of future leaders damaged by our system.

Some of us are vaccine damaged and don’t know it (irritable bowel, Alzheimers’s later in life, pediatric cancer — it’s all on the rise.  If you don’t believe me, watch the new documentary “Bought.”)As for me, I will get to meet RFK Jr. at a screening of Trace Amounts (yet another documentary coming to light on this issue). Bob, I am so grateful for the work you are doing to help educate our legislators on this very dangerous issue.  Glad you are thinking about your legacy and ours, someone has to.

Like Loading...
#cdcwhilstleblower #NoonSB277 are vaccines safe are vaccines toxic autism cases about vaccine damage Causes of Autism dangers of vaccination healing yourself Merck Parental Rights robert kennedy jr. should i vaccinate my child? should i vaccinate?
Previous ArticleGet Healthy Now!
Next Article Kennedy Speaks Out

This site uses Akismet to reduce spam. Learn how your comment data is processed.