The Latest:
You are at:Home»HEALTH»VACCINES MAKE MONEY:

By LORI MARTIN GREGORY on April 30, 2015 3 Comments
The U.S. Government is realizing an increase in profits on monies collected in the name of individuals with vaccine injuries — increases of $40m that correlate directly with heightened flu season and measles campaigns in the media, the MSJ has learned.

In analyzing balance sheets from monthly reports generated by the U.S. Department of Treasury (the governing agency in charge of investing and managing the Vaccine Injury Trust Fund, or VITF) — a direct correlation can be seen between when PR campaigns were launched and a significant increase in vax tax revenue. 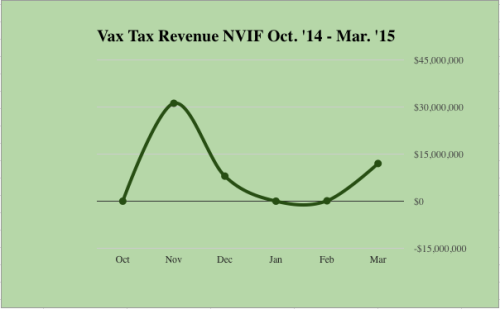 For example, during the month of March as the Disneyland campaign began to hit a fevered pitch in America, assets for the Vaccine Injury Trust Fund (VITF) which now total $4.6 billion, reached revenues of $12m in one month — up from $117,000 in revenues from the month prior (Feb., as word of the measles campaign was starting to spread).

The same effect occurred in November of last year (flu season campaign), when vax tax revenues for VITF spiked to $31 million in one month up from the miniscule $2,800 in revenues from the month prior (Oct., a non-campaign month).

Such erratic behavior involving such large sums of money invite speculation the U.S. Government is colluding with vaccine manufacturers to create fear-driven, pro-vaccine heightened awareness campaigns — events that stimulate the general public to vaccinate, thereby increasing vaccine sales and adding more cash to the VITF which the government can then turn around and invest.  Moreover, critics point out how the excessively high balance in the fund ($4.6 billion as of March), sits earning interest instead of being used to help distressed families as it was intended. Vaccines are taxed at a rate of $.75 per vaccine, or $2.25 for a triple-shot like the MMR, which was promoted as the vaccine of choice to combat the Disneyland campaign.

Despite designation of the NVIF as a vehicle to help provide relief to vaccine-injured families, many who suffer the loss or injury of a loved one from vaccines opt out of the process altogether — often the result of intimidation of working with the Government’s aggressive attorneys which are paid for out of the NVIF, or because of the excessive lag time in processing claims, which often extends the life of their pain and suffering for up to 10 years. 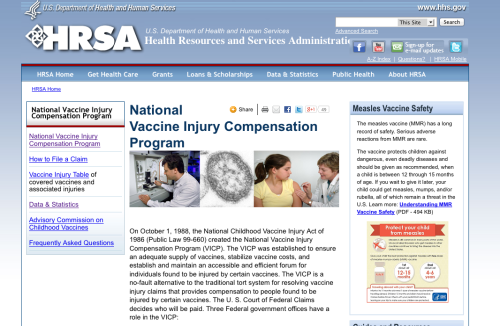 In addition to the correlation between pro-vaccine PR campaigns and spiked revenues, the MSJ has also learned that top vaccine manufacturers and some of the government agencies that monitor and regulate them are all working side by side with the same world-wide public relations agency — Ogilvy & Mather.  By living under the same PR umbrella, organizations like Merck, Boehringer Ingelheim, Bristol-Myers Squibb, GlaxoSmithKline, Novartis, Pfizer, and Schering-Plough as well as the Centers for Disease Control (CDC), the National Institutes of Health, FEMA, Homeland Security and the U.S. Department of Health and Human Services can enjoy economies of scale and shared messaging, all operating out of O & M’s Washington, D.C. office.  In fact, the HRSA’s website which has information about NVIC can be seen right next to a sidebar which features an info graphic about the safety of … the measles vaccines.

Increased revenues aren’t the only result of these lucrative pro-fear campaigns (vaccine revenues globally increased to $12 billion a year in 2005, $48 billion a year in 2015, and are expected to increase to $52 billion by 2016): within weeks of the launch of the Disneyland campaign, 110 bills rolled out in 35 states on cue, seeking to snuff out all personal belief and religious exemptions to mandated vaccines — a well-orchestrated event that took its cue from the fear-driven hysteria that traded on the demonization and marginalization of unvaccinated children, and at the same time ensures increased revenues from vaccine sales for generations to come — including vaccines not yet on the market.  Passage of such legislation will bump revenues even higher, at a time when parents question the validity of injecting children with up to 24 doses of vaccines by the age of 18 months. 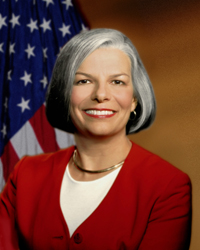 Moreover, because the players are trading on the pain and suffering of both vaccine-injured and the unvaccinated, they are stirring up controversy amongst parents in an environment where public confidence in both the vaccine program and big government is at an all-time low.

Speculation about conflict of interest issues ignited, when in 2009 CDC Director Dr. Julie Gerberding resigned from the CDC to walk across the street and become head of the vaccine division for the world’s largest vaccine manufacturer, Merck.

In December, on the heels of the $31 million vax tax spike from November alone, and just as Dumbo was about to give Merck a nice Christmas bonus, Gerberding was promoted by Merck to Executive Vice President for Strategic Communications for Global Public Policy and Population Health — the perfect job title for a seasoned executive about to assist in the orchestration and ushering in of 110 bills in 35 states. 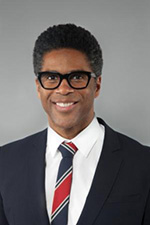 Dr. LaMar Hasbrouk takes the helm of the Big Pharma funded NACCHO after 11 years at the CDC

Furthermore, sixty days after Gerberding’s promotion, another former CDC executive and Gerberding associate joined the vaccine arena.  The National Association for County & City Health Organizations (NACCHO), an organization that looks/sounds & feels like a federal conglomerate for public health offices around the United States, but in actuality is a pro-vaccine public-policy-pushing organization that is funded directly by vaccine manufacturers, was turned over to Dr. LaMar Hasbrouck who is now NACCHO’s Executive Director.   Not only are Gerberding and Hasbrouck both alumnus from the same university (UC Berkeley), but both were employed by the CDC for 11 years at exactly the same time (Gerberding from 1998 – 2009), (Hasbrouck 1998 – 2009).

NACCHO is just one of many big-pharma-sponsored organizations designed to pressure the public into forced vaccinations. Another, Sacramento lobbying firm DiMare, Brown, Hicks & Kessler, has been directly advising California Senators Ben Allen and Richard Pan on the Senate floor during crucial moments in SB277 — legislation seeking to remove children from public school if their parents feel a need to delay, postpone or opt out of vaccines for health, religious or other concerns. DBH&K boasts the Bill and Melinda Gates Foundation as one of their clients.

Because noted environmental litigator Robert Kennedy Jr. made an appearance in Sacramento several weeks ago, his voice has been added to a debate that new and first-time parents have been wrestling with for years: do I risk vaccine injury with my newborn, or risk catching a childhood disease?  Reports of highly vaccinated populations experiencing break-through infection have sprung up around the world, inspiring parents to reconsider the artificial stimulation of temporary vaccine immunity versus managing the health of their child naturally, which avoids the complications and risks of injuries sometimes associated with vaccinations and instead provides natural, lifelong immunity.

Despite an overall media blackout due to fear of loss of advertising revenue from big pharma by traditional media outlets, parents are taking to social media to share their stories, one of the more poignant being the #hearthiswell campaign on youtube, which features 1100+ heartbreaking videos of parents who tell of lifelong challenges with their vaccine-injured children — a place they would gladly trade for 10 days to 2 weeks of a childhood sickness.

Like Loading...
Disneyland
Previous ArticleMary Holland NYU Legal Scholar on SB 277
Next Article are you seeing red yet?

This site uses Akismet to reduce spam. Learn how your comment data is processed.